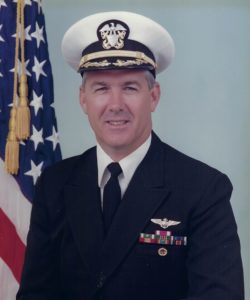 Robin M “Rob” Parker, 73, of Virginia Beach, Virginia, passed away March 12, 2022 from cancer. He was born on July 6, 1948 in Los Angeles, California to Roswell and Loretta Parker. He graduated from San Jose State University in 1972, where he met his wife, Lynda. After Rob and Lynda were married in 1972, Rob joined the Navy and became a Naval Aviator. He had assignments in Florida, California, the Netherlands, Virginia, Texas, and Alaska. Rob retired as a Captain after 26 years of service. Over the course of his military career, his awards included: the Legion of Merit, multiple Meritorious Service Medals and Navy Commendation Medals, various unit citations, and deployment ribbons. After a full military career, Rob went on to get an accounting degree at George Mason University and began a second career as a Certified Public Accountant.

In 2007, Rob retired a second time and he and Lynda moved to Virginia Beach to be close to good friends and enjoy the beach life. In retirement, Rob was very active with his church, St. John the Apostle where he was a fourth degree Knight in the Knights of Columbus. He put the skills from his two careers to good use by volunteering hundreds of hours providing free tax preparation assistance through AARP and flying those in need of medical assistance through the Angel Flight network. When not helping others, he spent his days gardening, enjoying the pool, at happy hours with friends, and visiting his kids and grandkids.

He was predeceased in death by his parents Roswell and Loretta Parker.

Rob’s greatest joy was his family and spending time with them. He will always be remembered as a loving husband, a caring “Pop” to his three kids, a devoted “Gipper” to his seven grandkids, and a loyal friend to the many that knew him. He will be dearly missed by all.

The family would like to thank the many doctors and their caring staff who worked tirelessly to find a cure including Dr. Sunil Singhal, Dr. Melina Marmarelis, and Dr. Keith Cengel at University of Pennsylvania Med Center and Dr. Craig Franzman at Cancer Specialists of Tidewater. Additionally, many thanks to the doctors and nurses at Virginia Beach General Hospital and the compassionate staff at Sentara Hospice House. Rob was blessed to have so many good people with him during this journey and the family is eternally grateful.

A Mass of Christian Burial will be celebrated on Saturday, March 26 at 2:00 pm at St. John the Apostle Catholic Church, 1968 Sandbridge Road, Virginia Beach, VA 23456. A reception will follow in the church commons. In lieu of flowers, donations in Rob’s name can be made to the St. John’s Parish Hall fund.