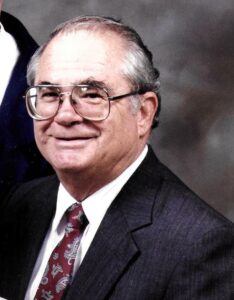 Edward L. Hardin, 87, passed away peacefully at his home on December 5, 2021. He was born in Cameron, Oklahoma in 1934 to Beulah and Lonnie Hardin. He was predeceased by his parents, and wife of 61 years, Virginia “Gina”.

Edward joined the Navy from an ROTC program at the University of New Mexico and became a Commissioned Officer upon graduation. Edward and Gina were married in GA in 1957 while he was attending Naval Supply School. He served 21 years in the Navy including tours aboard the USS Ranier and USS Montrose. After he retired from the Military, he took a job with the City of Norfolk as a Deputy Director of Social Services until his final retirement in the early 90’s. During his retirement he volunteered with Special Persons Mailing Service and enjoyed time with his family.

Edward was a loving husband and devoted family man. He loved his children and grandchildren and made sure he was present at their sporting events, music and dance recitals, and special events. He enjoyed any event that brought the whole family together. He was also a devoted member of Kempsville Presbyterian Church and the Men’s Breakfast Bible Study. Friends and family knew him to be a kind, generous man, often forgoing material possessions in order to make sure those around him were provided for. He was always willing to help those in need. He loved exploring new places and had a routine of revisiting places he loved. He will be deeply missed by those closest to him.
The family wishes to extend their deepest gratitude to the many dedicated caregivers who cared for him during his time of need.

A service celebrating Edward’s life will be held at Kempsville Presbyterian Church in Virginia Beach on Friday, December 10, 2021 at 10:30 a.m. A reception will follow in the Church Fellowship Hall. A burial will take place at the Albert G. Horton, Jr. Memorial Veterans Cemetery in Suffolk, VA at a later date. Condolences may be offered to the family at www.familychoicefunerals.com.

Please share a memory with the family via the “Condolences and Tributes” tab.