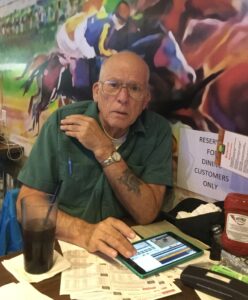 Frederic found great enjoyment in weekly Tai Chai classes, spending time with his loved ones with special enjoyment of his time spent with his grandchildren and great grandchildren. He enjoyed the relaxing weekends spent at Lake Gaston with his family and sunning himself on the deck. He had an undying love of horses and horseracing. You could often find him at the OTB (off track betting) on Sundays with his daughter Susan and son in law, Jimmy. Frederic loved his Monday Morning breakfasts at Village Inn with his son Tim. He cherished these times immensely.

Frederic was the gentlest and kindest man to all who had the pleasure of knowing him. He will always be remembered as a loving and devoted father, grandfather, great grandfather, Husband and friend with a heart of gold and huge generosity.

Frederic was predeceased by his parents, Richard and Alice, His siblings, Jeanne, Richard, Katherine, Dolores, and Alice and the love of his life, Elise K Hostman.

At Frederic’s request all services will be private. Feel free to offer your condolences via the “Memory Wall” tab.