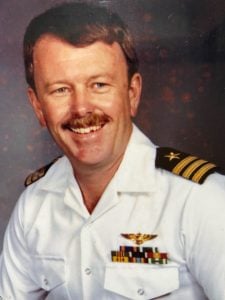 Gilbert Norman Hooker, 79, of Virginia Beach quietly took his last flight on Tuesday, September 27, 2022, with his close family seeing him off.

Gib was born in Muskogee, Oklahoma, on May 5, 1943. He was the first of three boys of loving parents Gilbert and Norma Hooker. Gib lived in Oklahoma, Missouri and Texas, where he graduated from Weatherford High School. He spent his youth rolling tractors, chipping teeth and readying for a golf career before attending and graduating from the University of Texas.

Gib volunteered to join the United States Navy and became an exceptional fighter pilot. He was highly regarded and respected by his fellow pilots. He deployed on two cruises on the aircraft carrier USS Ranger (CVA-61) during the Vietnam War and flew the F-4 Phantom on multiple missions. He received a Gold Star for successfully escorting an RA-5C Vigilante reconnaissance plane deep into enemy territory. Later in his career, Gib transitioned to the F-14 Tomcat fighter jet and went to Top Gun, first for training and later to fly as the enemy in the A-4. He retired from flying in 1989 but continued his Navy commitment, instructing the next generation of pilots on the F-14, and later F/A-18 Hornet, training simulators for 16 years.

As a young pilot in San Diego, Gib met his wife Connie, a school teacher, on an impromptu motorcycle ride with friends. Later that day, they met again at a Navy party, where Gib consoled Connie about her father’s recent passing. His gentleness and compassion won him her heart. Their relationship quickly bloomed into an undying love and commitment to each other. That love brought new life into this world, four adoring children, and nine grandchildren, along with many, many wonderful memories.

Military Honors will be held at Albert G. Horton, Jr. Memorial Veterans Cemetery at 11:00 a.m. on Thursday, October 13. The Celebration of Life will be conducted at 1:00 p.m. on Friday, October 14 at the Virginia Beach Christian Church, 2225 Rose Hall Dr., Virginia Beach, VA 23454.

In lieu of flowers, donations can be made to the Alzheimer’s Association or American Cancer Society.