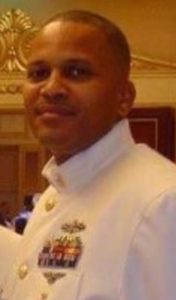 Tyrone, affectively known as “Scoop” was born May 6, 1965 in Anniston Alabama to the late Nathaniel Tyrone Ramsey Sr. (Scant) and Mary Ann Ramsey Lewis. He was educated in the Anniston public school system and graduated high school in 1984. Scoop went on to receive his master’s degree in Criminal Justice from St. Leo University. He served and retired from the United States Navy 1984-2007 reaching the rank of E7 CTAC (SW/AW) “Chief Ramsey”. Following his naval career, he went on to work with Norfolk VA PD&C United States Postal Service from 2010 to 2021. At an early age he accepted Jesus Christ as his personal Lord and Savior. He had a generous spirit and allowed God to use him to make other’s lives better. In his own time, he enjoyed cooking, golfing, listening to various genres of music, riding his motorcycle, taking the boats out and fishing with the boys, hunting, grilling, watching westerns, boxing and football, especially the Dallas Cowboys. Most of all he enjoyed spending time with his family and making sure that all of their needs were met. In addition to his parents Tyrone was preceded in death by his sister Natalie D. Ramsey Jones

A private Memorial with Honors will be held Wednesday December 29, 2021 Eulogy by Ministers Lorne and Gloria Cooley of Hedges and Highways Ministry and Rev Alberta McCrory.