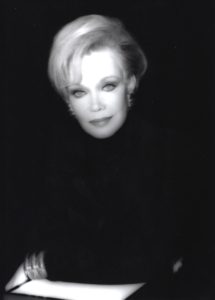 Mrs. Fox was born August 11th, 1933 to James and Ellen Edelin in Dorsey, Maryland. Norma’s life was extraordinary to say the least. Norma’s life reads like a Danielle Steele novel. She was an orphan and raised by different foster families as a child. Her height and thin build led her into modeling, but not until she was 28 and already an established career woman and mother. Fashion played an important role in Norma’s life. She was the fashion consultant for the Arrow Shirt Co. and would often say she was responsible for “getting men out of plain white shirts”. Norma founded Glamour Modeling and Talent Ltd. Her agency kept her busy around the clock. She taught the modeling courses and would coach models and actors for commercials, shows, and television and print work. Norma, along with her beloved husband Buddy Fox, found that traveling helped to rejuvenate her mind and body. She climbed the Great Wall of China, hitchhiked through Russia, tracked gorillas in Africa, ridden camels across the Egyptian desert, rode a mule to the bottom of the Grand Canyon and camped in the Serengeti as she tracked lions on safari. Norma would often say “I never see the negative side of things or people. That has helped me in business and traveling the world” When Norma and Buddy weren’t traveling you could find them in their Great Neck home with the ones they love. Norma will always be remembered as a loving mother, grandmother, great-grandmother, and friend. She will be deeply missed.

Norma was very specific that she did not want a funeral service or flowers. She loved animals, so the only thing she asked was to be remembered by a memorial donation made to Hope For Life Rescue at www.hopeforliferescue.com noting “in memory of Norma Fox”.