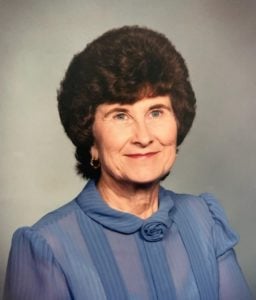 Rosalind Ainsley Davenport Oliver celebrated her homecoming with her Lord surrounded by family on May 11th in Virginia Beach two days prior to her 95th birthday. She is predeceased in death by her husband of 70 years, Ervin Brantley Oliver Sr, and her daughter, Ginny Lynn Oliver Sorrell. She was born on the family farm in Creswell, North Carolina to parents Doctrine Elwood and Rennie Ainsley Davenport. She was the last survivor of beloved siblings Jennings Marion Davenport, Minnie Lee Sawyer, Rennie Eugene Davenport, and Louise Oliver Roach. She is survived by her son Ervin Brantley Oliver Jr (Buddy) and his wife Della of Virginia Beach, son-in-law Dr. M. Ron Sorrell of Virginia Beach and his fiancée Laura Saunders Staylor of Portsmouth; grandchildren Jason Scott Oliver of Norfolk, Ellen Ainsley Oliver Dickerson of Virginia Beach, and Michael Ronald Sorrell Jr and his wife Paris of Arlington; great-grandchildren Ainsley Rose Dickerson, Bridger Brantley Dickerson, and Robert (Robbie) Sorrell. She is survived by sisters-in-law Margie Adams and June Toppin (Earl) and brother-in-law Maurice Oliver (Joyce). She is also survived by many beloved nieces, nephews, and friends.
Rosalind’s parents died when she was young and she went to live with her sister Gene, brother-in-law Earl, and niece Joyce who became like a sister to her. They were close throughout her life with visits and phone calls. Rosalind loved all of her extended family and regularly stayed in touch. She graduated from Creswell High School and moved to Washington D.C. to work as a clerk for the FBI during the war. She kept letters she received from J. Edgar Hoover congratulating her on promotions while working for the bureau. She married her childhood sweetheart Brant, the love of her life, on March 17, 1946 in Cheverly, Maryland after Brant returned home from the war. Due to a housing shortage in the Washington DC area, they moved to the Park Manor neighborhood in Portsmouth, Virginia where they raised two children and became members of Simonsdale Presbyterian Church for 50 years. Rosalind came from a family of deep faith and continued her devotion to the Lord by teaching Sunday School and serving as Youth Group Leader and President of the Women of the Church. She was one of the first female church officers at Simonsdale. Rosalind believed so much in the power of prayer and helped to organize a prayer group at Simonsdale that met weekly in the church parlor. Rosalind was a wonderful mother, grandmother, and great-grandmother and set an example of deep faith, love, and positive-thinking. Rosalind and Brant moved to Virginia Beach in 1999 to live with Buddy and Della due to Brant’s failing health. They joined Grace Covenant Presbyterian Church of Princess Anne where they became members of the Prayer Team and Rosalind was active in the Women of the Church. In 2014 as Brant’s health continued to decline and Rosalind’s health started declining, they moved to private care homes in Virginia Beach for twenty-four hour assistance. While there Rosalind continued to share her faith, encourage others, and keep a positive outlook. The family would like to thank the many kind, talented, and dedicated care-givers and medical staff that attended her over the years including Dr. Susan Ring, Gail Richner, and most recently Heather Withrow of Magnolia Manor and Joy Coffee of At Heart Hospice.
A Committal/Entombment Service will be held at Princess Anne Memorial Park at 3:00pm Friday the 3rd of June. The family will gather for a private viewing at Family Choice Funerals & Cremations from 12:00 to1:00 pm prior to the Committal/Entombment Service.
A Service of Worship in Witness to the Resurrection and Remembrance will be held at 2:00 pm Saturday the 4th of June at Grace Covenant Presbyterian Church Of Princess Anne, 2228 Princess Anne Rd. Virginia Beach, Va. 23456.
In lieu of flowers, donations may be made to Grace Covenant Presbyterian Church Memorial Fund. Online condolences may be made at www.familychoicefunerals.com.