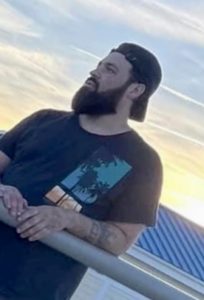 He is survived by his father, Kevin Johnson (Wendy); his brothers, Justin Johnson and Garrett Wilson; his 5 children – Jayden, Alexis, Khloe, Kyler and Mariah; his grandmothers, Carolyn S. Johnson and Gail Laurie; his nephew, Rylo; and his step grandmother, Carolyn P. Johnson.

Wesley was a beloved father, son, brother, uncle and friend. He was an avid sports fan and lived for watching Washington football on Sundays. It was his greatest joy to be with his family and have weekend cookouts. He will always be remembered by the way he could light up a room with his jokes and laughter.

While his family is deeply saddened with his passing, they are eternally grateful for the time they had with him and will take comfort in knowing he is back in the arms of his beloved mother Andrea Johnson, grandfather Robert Johnson and uncle Brian Johnson.

A Celebration of Life service will be held on November 19th at 2:00pm at Icehouse Restaurant in Virginia Beach.