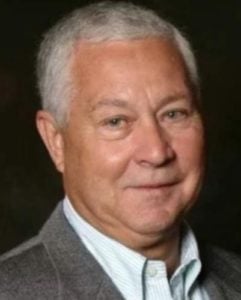 He is survived by his loving wife of 38 years Vicki Moore Williams and their three children Ewing, Rhett and Susan and two children, Greg and John Williams, from a previous marriage to Judy Allen Williams. He is also survived by his four grandchildren: Madeline, Rosa, Isabella and Christopher.

Bill was born in Tarboro, North Carolina and moved to Norfolk when he was five years old. Bill graduated from Granby High School and later earned a Bachelor of Science degree from Old Dominion University. He then began nearly a 40 year career as a Pharmaceutical Salesman in the Tidewater area.

He loved his job and was well suited for it. Those who knew Bill, know that he had the gift of gab and enjoyed meeting and talking to people.

Bill’s biggest accomplishment was being a husband, father, papa, and family man. He always made time for his children with family ski vacations and coaching their sports teams. He especially loved the holidays and having all his children and grandchildren home.

Bill will be dearly missed by his family and friends. Bill’s family plans to honor him with a Celebration of Life at Francis Asbury United Methodist Church in Virginia Beach on Sunday, November 13th at 3:00 PM. In lieu of flowers, the family asks that memorial donations be given to the VB Volunteer Rescue Squad at vbvrs.org